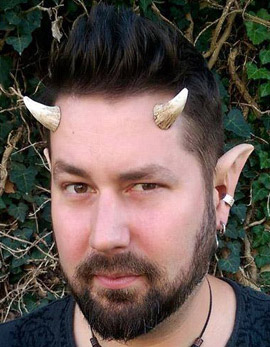 Michael Bielaczyc has been making art his whole life.

He has been selling and showing work since 1995, when he self published his own comic book. Going back to college at 23, he decided that art was going to be his main focus in life.

In 2001, he started an art company, Aradani Studios, with his brother Paul. Together they have shown and worked in shows across America selling both their artwork and costuming. While Michael has worked for such popular role-playing franchises as Dragonlance and Castlemourn, his real passion is for his personal work. He works in mediums from oil paint to latex prosthetics, video to graphite.

You can see his work at www.michaelbielaczyc.com.

Making Cyberpunk maps for your Table